Or maybe join www.Manzzle.com and that also gives access to www.ManzXVid.com

In the first part of a series shot in LA, Liam Riley & Sean Zevran spend time together enjoying the city.and each other's company on a warm winter's day. Playful flirting and a sensual shower together leads to increasing sexual attraction that reaches critical mass. As Sean lies in bed stroking his thick cock, Liam stands nearby, also hard and stroking and when he's bent over with near-feverish intensity he mutters in a semi-hoarse whisper, " Fuck...I want you so bad."

Sean bounds from the bed and with unleashed passion wraps Liam in his muscular body and makes out with him. Sean takes charge, turning Liam around, pressing him against the wall and burying his mouth in the crack of Liam's ass. Liam soon begs for Sean's cock and with just a hint of teasing Sean gives him every inch. He drives deep into Liam and soon they're in sync, power top and power bottom each thrusting into one another, both in control.

Moving to the bed Liam and Sean make out again but Liam' focus is on Sean's cock. With his kisses Liam worships Sean's muscular body on his way to sucking his cock relentlessly, enjoying it all and giving Sean pure pleasure. Soon Liam is ready to ride Sean's cock and he does, both forward and reverse with Sean driving even deeper inside him.

Sean takes control again, flipping Liam on his back to fuck him hard and hold him by the throat. Immediately Sean hits Liam's internal bulls-eye and the vocal bottom urges him to keep going until he shoots a huge load all over his abs. As Liam finishes Sean has also hit the breaking pint and as Liam requests he slides up and gives him large, creamy facial. They bask in the afterglow, sharing sexually satisfied giggles and a sweet kiss. Think they're ready for more? 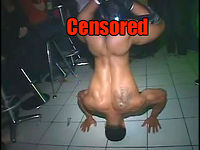 Details
by Hilton 8 years ago
in Gay, Previews
Trailer for Raw Players.
0 0
5,290 views

Details
by Hilton 8 years ago
in Gay, Previews
Trailer of Don't Tell My Girl. Starring: T-Bone and Kriz XXL.
1 0
5,134 views

Details
by Hilton 7 years ago
in Gay, Solo, Self Suck, Next Door Ebony
Hung black Sean Xavier can suck his own dick and rub his asshole with his own cock.
0 0
52 views

Details
by Helper 7 years ago
in Gay, Randy Blue
Andrew Jakk is playing photographer today. He gets to document one of the most exquisite physiques e...
0 0
36 views